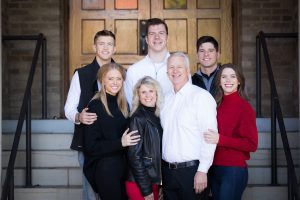 Phil Sorrells is the conservative Republican candidate for Tarrant County Criminal District Attorney. Sharen Wilson has announced she will not be seeking reelection in 2022. Phil Sorrells is the candidate with the right background, qualifications, and experience we need to be our next District Attorney. A fifth-generation Texan, Phil believes criminal behavior should have consequences. Community standards in Tarrant County are tough.

As Judge of Tarrant County Criminal Court Number 10 for 25 years, Phil Sorrells has decided thousands of cases, and his docket is the lowest in the county. Phil resigned his bench to campaign for District Attorney.

Prior to being elected judge, Phil was an Assistant District Attorney, working every day to assure that criminals are punished for crimes they commit. An experienced felony prosecutor trying cases from theft to murder, Phil learned how to use the laws passed by our legislature to ensure maximum jail time for the violent, career criminals that prey upon our families.

Phil Sorrells supports law enforcement. Officers will know he has their backs. He will fight to make our officers a priority in every local jurisdiction in the county. In Tarrant County, we do not defund the police – we support the police.

Sorrells knows that illegal immigration is not just a problem on the border. It impacts Tarrant County. Joe Biden’s reckless policies have allowed human and drug trafficking to go unchecked. Sorrells will aggressively prosecute criminal conduct by illegal aliens and will make every effort to detain them until they are deported.

Phil earned his undergraduate and law degrees from Texas Tech University before joining the Tarrant County District Attorney’s Office. Phil and his wife, Susan, have three grown children and live in North Richland Hills. Together they are active members of North Richland Hills Baptist Church.